Getting a Piece of The Action (Lawyers, Bureaucrats, Accountants and Insurance Executives – Managed Care)

A while ago I heard an advertisement on the radio for John Ralston Saul. I don’t really understand what the ad is promoting but it rings true to me. It basically says the business and political thrusts for corporatisation and managerialism have been unsuccessful and have not influenced poverty or war, for example.  The advertisement goes on to say we need to shift society’s focus to one where value is restored to effort, initiative, memory, wisdom, experience, commonsense and a few others I cannot remember. 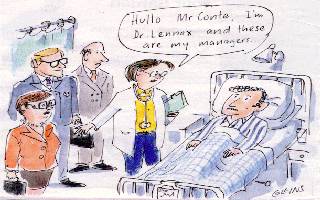 I have written of the score led-earth managers of the 1990s before. One of our society’s great problems is the plethora of managers and the lack of leaders.

Managerialism is ruthless and demands rules that are to be obeyed rather than flair and initiative. It builds empires of people to give jobs to and regulate others.

Each week I answer someone in the institution in which I work, saying: “You do not give me jobs. My time is more important than yours. If you want this done I Will show you how to do it. But do not bother me with your time-wasting requests again.”

A few examples of the intrusion of others into what doctors do have come my way recently.

I sent off a scientific article and a couple of chapters for a textbook. When the copyright forms came back there was a section for me to sign stating I indemnified the publisher against any litigation that might arise from publication.

Now it seems unlikely anyone could get sued over a scientific article, but it has happened. Many years ago a Professor Robinson of the UK wrote a paper showing dental anaesthesia with a particular drug and an unprotected airway meant the contents of the mouth could wind up in the lungs. Dr Drummond Jackson sued on behalf of the Society for Advancement of Anaesthesia in Dentistry.

There was more to it than that because Robinson’s experiment wasa little flawed, and words were exchanged in public. And I suspect there was an issue regarding ownership of anaesthesia and whether dentists were entitled to a piece of the action. The case almost bankrupted the British MDU.

After about eight months of court case Lord Denning called both sides together and said they should go home because he wasn’t going to find in anybody’s favour and they took his advice – the doctors to lick their wounds and the lawyers to spend the loot.

It is not beyond the realms of possibility that a mistake in an article could slip through the proofreading. There are two editions of a US textbook that says “cyanide poisoning from oleander berries occurs about as commonly as rocking horses defecate”.

We were pleased to get that past them. Or suppose your article has the dose of digoxin changed from milligrams to grams and someone gives it.

To me the publishers make the lolly and they should carry the can. So I refused to sign. There was an exchange of letters and a few suggested alternatives and I still refused to sign and they threw in the towel. They were bluffing. A lawyer doctor friend, who was similarly battling with a publisher, also made them capitulate.

So if you get one, join the team. The trick is to dig in as late as possible in the process.

Another example that occurred recently concerned the Cochrane Foundation meta-analysis showing patients in intensive care units who get albumin die. It is nonsense.

I know personally two who refereed it and recommended it be rejected. The press got onto it and there were howls of rage from doctors.

In Australia the government buys albumin from CSL and gives it to hospitals and I think someone Saw an opportunity to save a buck because the next thing a letter came around from the government wanting comments.

To my knowledge no one had ever received anything about a meta-analysis before. It is hard to think patient welfare was the motivation rather than dollars. I know of two other meta-analyses that found in favour of drugs we don’t have or can’t afford. No please explain letters about them have arrived.

More work generated by people who want a piece of the action. And too important to tell them to get stuffed. (The albumin, not the bureaucrats.)

Ken from Texas sent me an e-mail the other day. Ken believes the medical profession in Australia must fight to the last man to stop the iniquities of managed care being introduced here.

He writes how the New Jersey Automobile Insurance Cost Reduction Act, designed to cut premiums 15%, will do so by only paying for services in critically ill crash victims which have been approved in the “care paths” designed by Price Waterhouse. Not the College of Surgeons Trauma Committee or the American Association of Trauma Surgeons but a mob of lawyers and accountants, who no doubt will receive a handsome piece of the action for seeing that it all runs smoothly.

Following critical paths will restrict the things that Ralston Saul talks about.

It is interesting to note also that New Jersey is legendary for the frivolous personal injury claims that the punters and the lawyers get rich on. But there is no effort to stop these activities.

If lawyers, bureaucrats, accountants and insurance executives want to practise medicine they should go to medical school. Society today allows them a piece of the action but we need to keep the rule book out of their hands.

To me it is like the Pope and contraception. If you aren’t playing the game you should not be in control of the rule book.